WML opts for integration between SAP and Office 365

WML is a professional organization that constantly pays attention to optimizing its business processes. A few years ago, the idea arose to bring collaboration and sharing of documents and information to a higher level. This implies that seeking and finding documents and information about, for example, contracts, projects or suppliers must be easy and that employees can work (together) more efficiently. In addition, the reliability and accuracy of information play an important role. Ultimately, an improved working method would have a positive impact on both the professionalism of the organization and the internal cooperation.

At WML, the realization grew that a digitalized information management would increase the efficiency of the organization. This meant that there was a need for a Document Management System. After exploring the market, WML became convinced of the possibilities of Microsoft Office 365. The goal was to achieve more speed because employees would lose less time searching, editing and sharing documents. As a result, this would improve the quality of information because employees would certainly work in the right version of documents. In the end, this should result in higher productivity in the field of information management. 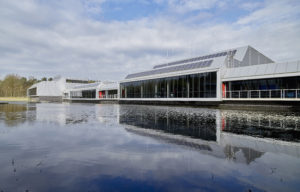 Why WML has chosen for Ometa

To achieve these goals, WML conducted a market survey in which Ometa was ultimately chosen to take care of the implementation. In this choice, two elements were decisive for WML. With Ometa they had a tool that is capable of seamlessly connecting SAP, which contains their processes and resulting structures, to Office 365. In addition, Ometa offers the possibility to automatically provision sites, which also made the Ometa framework the best option in terms of technical manageability.

Within the WML solution, Ometa creates the bridge between SAP and Office 365. The Office 365 environment is the new digital workplace for employees. As soon as a process within SAP asks for this, Ometa automatically creates files (or sites) in the Office 365 workstation. For example, if a project, a supplier or a contract is created in SAP, a file is automatically created in the digital workplace, the people involved are invited to collaborate on the subject of that file and the right access rights are granted to these persons. This all happens automatically and in real time.

This also means that not only structured SAP information about objects such as contracts, orders, projects and staff is made accessible, but also all unstructured documents around these objects, such as quotations, project documents, meeting reports and personnel documents. In this way, thanks to Ometa, WML has a fully integrated digital workstation that is dynamically fed by SAP. 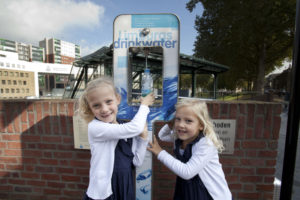 How did the collaboration go so far?

Ometa has experienced specialists who have developed their own set of tools using an in-house developed methodology in which they ask the right questions to enable such an integration. The first step that we took together was an in-depth content analysis. The results gave us a clear picture of the different information flows within WML. From this, we could then create a blueprint, which gave us a clear picture of where we wanted to go. The blueprint served as the basis for the planning of a total solution and decision-making at each stage. By taking the company characteristics and objectives of WML into account, we were able to work out the appropriate solution.

Ometa has pleasant colleagues who think along with us and help in each step of the implementation. (Aart Nap, WML)

Result: the best of two worlds

WML opted for a phased rollout. The implementation was gradually implemented in various departments: legal affairs, financial files, purchasing files, HR matters, projects, etc. The starting point was always that the processes in SAP were not to be changed, but would be used instead as the basis for the new dynamic collaboration in Office 365.

The dynamic cooperation is a result of the fact that the right information is shown in the right place. Depending on the status in SAP, files are created, modified or archived and can thus be used to collaborate. This reduces the search time for information. Moreover, the quality increases considerably because all information is now better available within one digital workplace and therefore it can be seen by many employees. The collaboration within Office 365 is always fully integrated with the processes and structures in SAP. 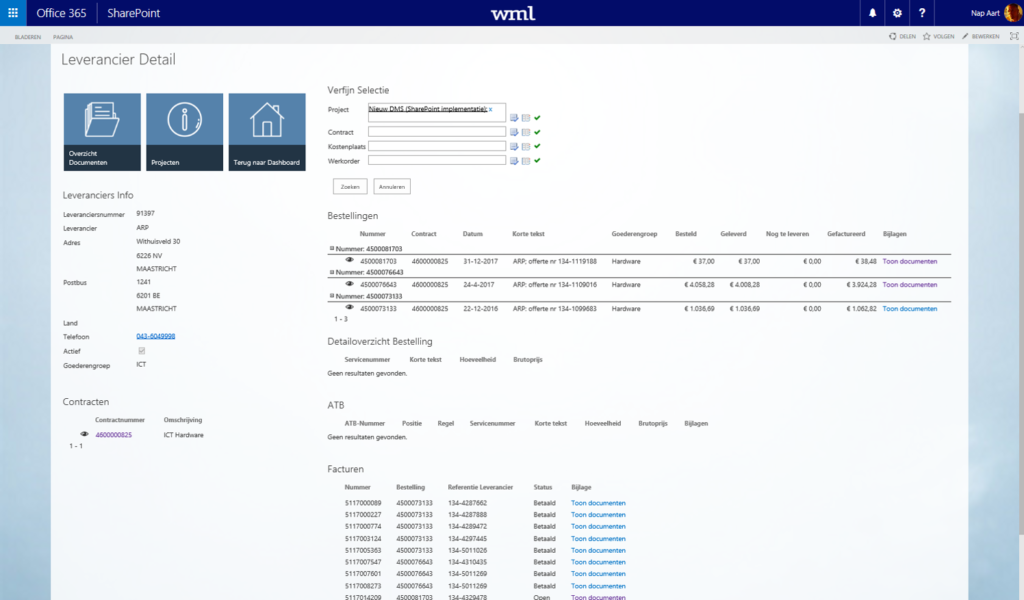 Example: supplier portal in which WML has a full view on all suppliers, including orders, invoices, supplier details, and so on. Data is coming from SAP and is combined with all relevant documents.

We already have about 1 year of experience with the use of this solution. Because we have consciously chosen to roll out the integration between SAP and Office 365 in phases, we are also working on the rollout of new integrations. We are already convinced that it has been the right choice to integrate with Office 365 because on the one hand it offers us many advantages in terms of manageability and extensibility and on the other hand we now use an existing structure, which increases the speed of implementation (Aart Nap, WML)

As far as the implementation is concerned, WML notes that it achieves enormous time savings because the structures from the ERP do not need to be reprogrammed. The power of Ometa lies in the fact that you can integrate SAP and Office 365 with each other just by configuring. At the same time, control from SAP processes also prevents the proliferation of files, which greatly facilitates controllability.

In addition to a good layout and implementation, there are of course the users and their adaptation. Ultimately, this determines the success of the implementation. As with many companies, WML has been used to working in the folder structure on a file server for a very long time. Because the average WML employee has been working at WML for a long time (about 20 years on average), many years of working in this way has made people used to this structure. For them, a switch to a new Document Management System, in which digital collaboration takes place in an online environment, is of course a learning process. To make everyone familiar with their new digital workplace, WML pays sufficient attention to training and supervision.

Ultimately, thanks to the integration between SAP and Office 365, we get the best out of both worlds. We respect the process-based and structured approach from SAP and combine this with the ease of use and the case-based approach of Office 365. This makes the information accessible to everyone and, in addition to the process information, we also structure the document flow of WML. (Yves Van Neck, Ometa)

Subscribe to our newsletter and stay up to date about the latest news, careers and framework releases!